The Gap Band – Yearning For Your Love 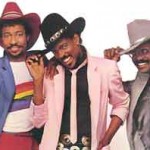